About Muzzleloaders And The History of Knight Rifles.

Knight Rifles is an American manufacturer of modern muzzleloading rifles and shotguns that pioneered the in-line muzzleloader in the mid-1980s. The company was founded in 1985 by Tony Knight who knew a lot about muzzleloaders. He was a gunsmith from rural Lancaster, Missouri, and he spent his life dedicated to the love of muzzleloading and black powder. Knight is now owned by PI, Inc. Originally headquartered in Centerville, Iowa, the company is now located in Athens, Tennessee.

The Legacy of Knight Muzzleloaders 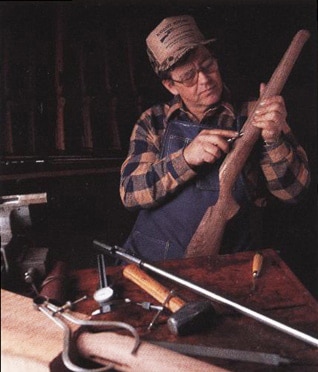 Tony Knight in his workshop, circa 1985.

It began in a shop of a gunsmith known for miles around as a master craftsman, inventor, and a huntsman who had stalked the fields for decades. His name was Tony Knight, and in his workshop in Putnam County, Missouri, he listened to the stories of hunters using their muzzleloaders. He studied the history, strengths, and problems of the front-end loader; from the most primitive flintlocks to the muzzleloaders of today.

These guns had changed little in over a century, sparking him to go to work creating a truly modern muzzleloader. As a result, Knight Rifles was born. Within a few years, what began as a vision led to the finest, safest and most versatile black powder rifle ever forged. A hand-crafted, light-weight muzzleloader that surpasses all others in accuracy, smooth operation, and deadly down-range stopping power. A barrel and firing system capable of delivering any form of ammunition to its target with awesome reliability and deadly accuracy.

This still holds true today as Knight Rifles continue to be the best in every aspect, at every level. Rich in history and performance, we create the future of muzzleloading based on the solid foundation laid by those who have come before us. In the years to come, you can expect only the best from Knight Muzzleloaders.