Hello everyone! We here at Knight hope you all had a great 2015 season! Let’s kick off the new year right with a new entry to our Welcome to Knight Series! In this one we will be discussing the bolt action and its corresponding safety systems.

The bolt action has been designed for easy removal and breakdown for easy cleaning of internal and external surfaces. The rifle also features a removable breech plug, making it easier to clean the bore thoroughly from one end to the other. The design also allows you to unload the rifle without firing by pushing unfired powder and/or bullet out the back of the barrel with the ramrod. 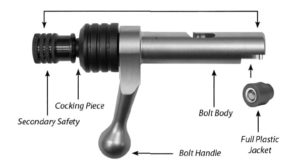 WARNING: Be sure rifle is not loaded or primed before disassembly or assembly.

Study the rifle schematic and acquaint yourself with the different parts and terminology of your muzzleloader before assembling or disassembling. Letters and numbers in parentheses refer to labels on each rifle schematic for each model.

It is advisable to use a padded vise to remove and reinstall the breech plug. Place small parts in a pan to avoid losing them.

When you are ready to remove and clean your Bolt Action, follow this procedure to avoid misalignment problems.

1.) With the rifle bolt handle in the up position, while pulling out on the spring loaded Quick Release bolt screw (Photo #1), pull the bolt out of the receiver.
2.) Turn the secondary safety clockwise until the cocking piece is drawn up against the front edge of secondary safety. (Photo #2)
3.) Unscrew the striker assembly counterclockwise, until it is free from the bolt body. (Further disassembly is not required; doing so may result in your having to send the bolt back to be reassembled.)

4.) Clean and oil as necessary.

5.) To assemble, thread the striker assembly clockwise into the bolt body. Do not apply any pressure after the threading reaches the end. Do not tighten the striker against the bolt housing.
6.) When the striker assembly reaches the end of the threads, turn it counterclockwise, until reference points are aligned with each other. Hold your thumb against the bolt (this will help allow you to keep the bolt body striker assembly aligned correctly) then
unscrew the secondary safety until there is no more pressure. If the assembly is not aligned, repeat steps 2, 3, 5, and 6.
7.) While pulling out on the spring-loaded Quick Release™ bolt screw (Photo #1), slide the bolt all the way back into the receiver. Release the bolt screw. Make sure the trigger and secondary safeties are both in the safe position. Close the bolt handle.
8.) The rifle is now in the cocked position with both safeties on.

The DISC Extreme™ and Long Range Hunter™ can be converted to use 209 primers with out the DISC Full Plastic Jacket™.

The Mountaineer bare primer bolt loads a
primer directly into the bolt. When the primer
is placed, the bolt automatically lines up the
primer to the breech plug. The bolt, when locked
down, will tighten the primer into the breech
plug. 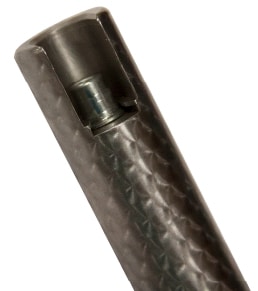 (Picture of primer installed in bolt)

That about does it! If you have any questions or concerns or looking for more information please feel free to contact our very knowledgeable staff by calling 1-866-518-4181.

Thanks for reading, happy hunting everyone!