The Vision Break Action Muzzleloader is a great .50 cal. rifle with no casted components and an unbelievably smooth fully machined trigger, the quality you always get when you buy a Knight. Your shots are guaranteed at 200 yards with the Vision. The handcrafted, American-made, Green Mountain® barrel ensures every shot is powerful, fast, and accurate. The Vision also comes Western ready for legal use in Washington, Oregon and Idaho and is 100% American made. 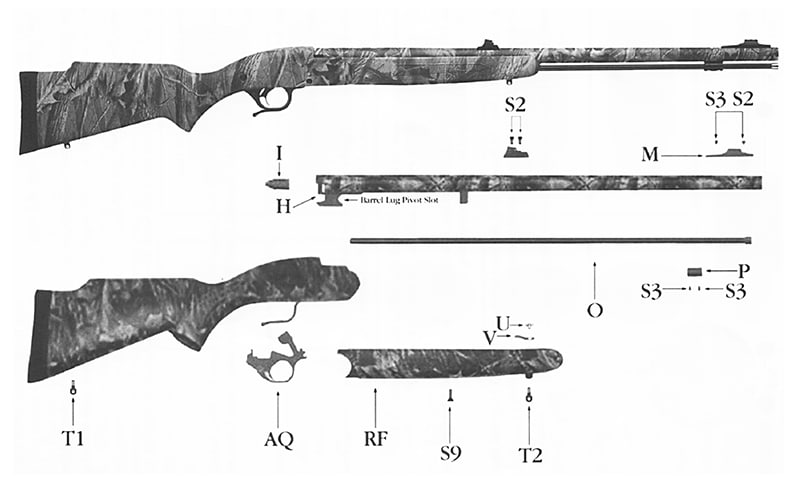 Be sure rifle is not loaded or primed before disassembly or assembly.

Study the rifle schematic and aquaint yourself with the different parts and terminology of your muzzleloader before assembling or disassembling. Letters and numbers in parentheses refer to labels on each rifle schematic for each model.

It is advisable to use a padded vise to remove and reinstall the breech plug. Place small parts in a pan to avoid losing them.

2.) Remove the breech plug. Pull the break open latch to open the rifle and expose the breech plug. With your finger, pull the extractor toward you, it will fold down and out of the way of the plug opening. Insert the combo tool (breech plug wrench side) into the receiver, engage the plug (part 1) and turn it counterclockwise until it slides out of the receiver. If more force is required, a hole in the combo tool allows for the use of a rod for added leverage. Put the plug in a jar of Knight Solvent for a few minutes while cleaning the barrel.

3.) Remove the forearm stock. By using the screwdriver end of the combo tool, take out the stock screw located on the underside of the stock. The stock and barrel easily separate.

The Knight Vision can be converted to use 209 primers without the DISC Full Plastic Jacket.

1.) Remove the old breech plug from the rifle, and extractor.