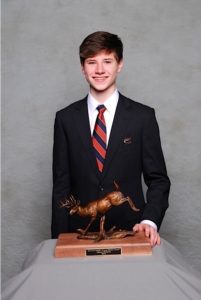 Why I Hunt With A Knight Muzzleloader: Written by Clay Monarch

Special thanks to Clay Monarch for taking a few minutes to let our readers know why he hunts with a Knight Muzzleloader.

I’ve been carrying a Knight Rifle and shooting Barnes Bullets since I was too young to appreciate how well they perform. My grandparents took me on my first safari to South Africa when I was ten years old. My older brother, Tom, and I carried Knight Disc Extreme .50 caliber muzzleloaders into the grassy savannah near Bloemfontein in search of blesboks. Two days into the hunt, Tom took a blesbok at around 120 yards. His first shot felled the animal in its tracks. Both muzzleloader and bullet performed perfectly. Near the end of our hunt with Madubula Safaris, a blesbok appeared in front of me too far for a muzzleloader shot. So, I took my first blesbok with my PH’s 375 H & H, and I was hooked on hunting from that day forward.

Two years later, we returned to South Africa to hunt a “Muzzleloader Grand Slam of Springbok”, and I knew my Knight Rifle was the right tool for the job. My grandparents, my brother, and I traveled to Jules of the Karoo, an amazing free-range ranch on the massive plateau of central South Africa. For this smaller game, we used Barnes “Spit-Fire TMZ” 250 grain all copper “Expander” bullets, which were the perfect choice. My grandfather modified and shortened the stock of my muzzleloader to better fit my frame. This allowed me to use the Knight Rifle with more accuracy. I took six springbok that trip with seven shots, with my only miss being no one’s fault but my own.

On the first day of our hunt, we stalked to within about 80 yards of a black springbok and waited for a clean side shot. My rifle performed flawlessly. And when we retrieved the bullet, it had mushroomed completely open as it traveled through the animal. He fell immediately and ranked as the #9th largest black springbok in the SCI muzzleloader record book!

When I was fourteen, my grandparents took my brother and me to New Zealand to hunt Himalayan Tahr, European Red Stag, Arapawa Sheep, and Fallow Deer. It was a phenomenal trip, and each animal was taken with a Knight Rifle and Barnes Bullets. Since I had grown, we replaced the shortened stock on my Knight Disc Extreme with a standard length fiberglass stock. For the larger game, we used 290 grain Barnes all copper “Spit-Fire TMZ” bullets with plastic tipped blue points. These expanded perfectly upon impact. (We recovered many of our bullets.)

By far the toughest animal of this trip was the Himalayan Tahr, which we hunted in the Cook Mountains of New Zealand. Many hunters take these animals from helicopters, but we stalked on foot. After four days of climbing steep, snow-covered mountains, I was finally able to get close enough to one of these elusive, wary goats to take a clean side shot. I was glad to have my Knight Rifle with me!

I am fortunate to be selected as the male Safari Club International & Cabela’s Young Hunter of the Year for 2015. This is an honor that I will value my entire life. And I owe much of my success to the consistent performance of the muzzleloader and bullets I use.

My muzzleloader means more to me than just a well-placed shot. It is a style of hunting that speaks of sportsmanship. It requires me to pull closer to the animals I’m hunting, to more carefully consider my shots, and to depend upon a firearm and bullet I know will take them down in one shot. I credit my grandparents with teaching me to be an ethical hunter, and I credit the accuracy of my muzzleloader and bullets with putting a challenge into this sport that reinforces that lesson.

More About Clay Monarch – Thanks to the Louisville Herald News

The male “2015 SCI & Cabela’s Young Hunter of the Year” is Clayton Monarch of Louisville. Clay, age 16, has hunted on 4 continents (Africa, Australia, North America, South America) and has plans to hunt on his 5th continent in June of this year when he will join his grandparents to hunt roe deer on the Queen’s Balmoral Estate in Scotland.
Clay has taken 11 SCI Record Book animals including 8 “SCI Muzzleloader Top Ten” animals. He says his most challenging hunt was his “walk-in”, muzzleloader hunt for free-range Himalayan Tahr in the Cook Mountains of New Zealand. On his last Argentina dove hunt, Clay was inducted into Sierra Brava Lodge’s “1,000 Bird Club” 3 times for taking more than 1,000 birds a day 3 days in a row.

A member of the Kentuckiana Chapter of SCI, Clay is a Youth Instructor for the Youth & Apprentice Hunter Education Program where he teaches shotgun safety and responsibility to other youth along with Mentor and Instructor Mike Maddox. Clay participates in the SCI Humanitarian Services “Blue Bag” program where he collects, assembles and hand delivers clothing, school supplies and the like to desperately poor children in rural Africa. He is also a strong believer in the “Kentucky Hunters for the Hungry” program and donates ½ of each deer he harvests to help support this program.

Clay has written about his hunting adventures and 4 of his hunting articles have been published in the Kentuckiana Hunter and 4 wildlife photos taken by him have appeared as “cover photos” for that publication. A sophomore in the “Honors Program” at St. Xavier High School, Clay is a member of the Ryken Service Club, Investment Club, and Medical Club. Clay, who aspires to be an Orthopedic Surgeon, has volunteered almost 300 hours at Kosair Children’s Hospital. Clayton is the son of Katie and Ed Monarch of Louisville and the grandson of Toni Mullins of Louisville and Alice and Sam Monarch of Hardinsburg. His older brother, Tom Monarch, who Clay says is his role model, received this prestigious honor in 2013.

Why I Hunt With A Knight Muzzleloader