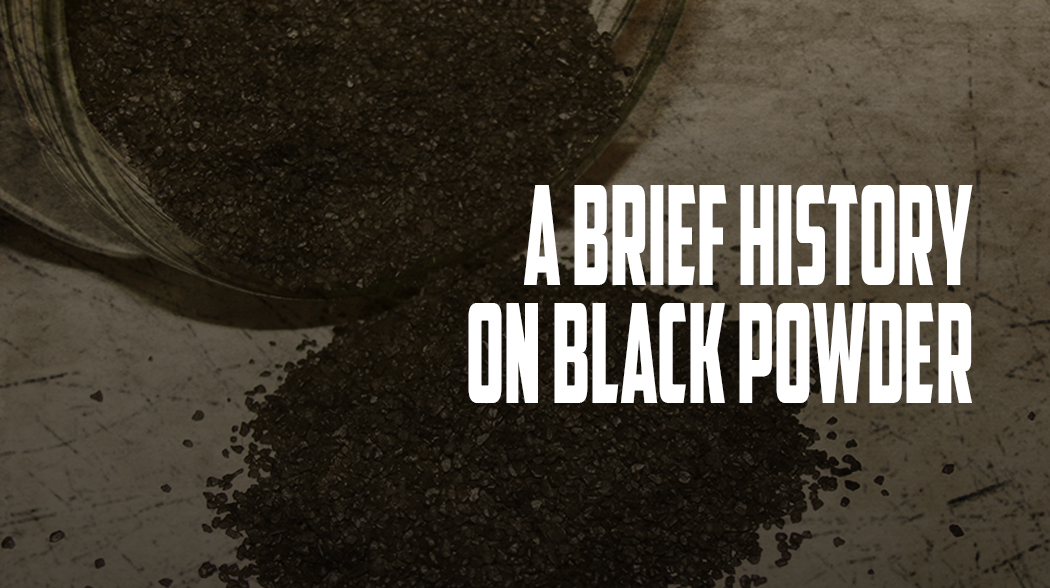 The History of Black Powder

Black Powder (also referred to as gunpowder) is the main ingredient used to shoot various styles of guns. Black powder consists of a perfect mixture of sulfur, charcoal and potassium nitrate. The sulfur and charcoal work together as fuel while the potassium nitrate is the oxidizer. Black powder is commonly used as a propellant in firearms, artillery, rockets, and fireworks because of its combustible properties and because of the heat and gas volume it creates. It is so powerful that it is also used as a blasting powder when quarrying, mining, and road building. Black powder is considered a low explosive material because it breaks down slowly, meaning it burns at subsonic speeds. That means it creates less of a supersonic shockwave. When powder is placed behind a projectile, it creates enough pressure to shoot the projectile out of the muzzle of a rifle at a very high speed. However, the amount of pressure is not enough to do any damage to the barrel of a rifle, making black powder the perfect ingredient for propelling a bullet at high speeds.

In earlier years black powder was used for a variety of tasks. One of those was shattering rock to build roads. Although it was less reliable because it did not create the explosive power that is often needed, it worked fairly well at the time. Black powder was also used to shoot cannonballs through a cannon. The powder was forced down in the cannon barrel before the cannonball. Once lit, it created enough energy to force the cannonball out of the barrel, which caused more destruction than the black powder alone. That method was very popular during the early wars. Up until the 19th century, black powder was frequently used in mining as well; however, modern high explosives eventually replaced the black powder.

Black powder is not commonly used today. Its days of industrial and artillery use have, for the most part, passed. The inline muzzleloaders are of the few modern weapons that still use black powder. Today, it is used mostly for hunting, target shooting, and historical reenactments.

Black powder has been around since the 9th-Century. It was originally created in China. At the time, black powder was considered one of the four greatest inventions spreading throughout Eurasia. Initially created for medicinal purposes, it was not until 904 AD that it was first used in weaponry or for war purposes. The first reference in history to black powder was during the Tang Dynasty. The formula was contained in the Taishang Shengzu Jindan Mijue ​ in 808 and then again fifty years later in the alchemical text of Zhenyuan Miaodao Yaolue ​. The invention of gunpowder was actually an accidental discovery by alchemists who were attempting to create an elixir of life. The concoction created was called huoyao ​, meaning “fire medicine.” Later on, the chemical formula for gunpowder was again referenced and was used in military operations recorded in the 11th century Song Dynasty text Wujing Zongyao; ​ however, now it is known that gunpowder was already used for fire arrows at least a century prior. Following the 11th century, gunpowder was
more commonly used in various weapons like bombs, fire lances, and guns.

Based on history, the knowledge of black powder made its way to the Muslims around 1260 AD. Recipes written in Arabic by Hasan al-Rammah referenced his knowledge of the substance from the Chinese. Contained in his text, The Book of Military Horsemanship and Ingenious War Devices​ , are instructions for the purification of saltpeter, descriptions of black powder weaponry, and one hundred and seven recipes for gunpowder, of which twenty-two were actually recipes for rockets. The arquebus, also referred to as the hook gun, was seen first during the Ottoman Empire. The matchlock version of this gun made its appearance within the Janissary corps during the first half of the 15th century, and the musket appeared in 1465. The Chinese writer Zhao Shizhen cites that the Turkish muskets were much better than the European versions due to their rack-and-pinion mechanism. The Ottoman Empire was the main manufacturer of black powder up until the 19th century when its military purposes began to decline.

The first western references to black powder in Europe show up in texts by the 13th century English philosopher, Roger Bacon. He mentions black powder as a type of firecracker. His sources reference Chinese firearms and black powder weapons being deployed by the Mongols against the Europeans in 1241 at the Battle of Mohi. Once the Europeans saw the Mongol’s new innovations in weaponry, they began adopting those same innovations. The Book of Fires​, attributed to Marcus Graecus, collects many gunpowder recipes that date back to around 1300. The recipe for what was called “flying fire” involved saltpeter, sulfur, and colophonium, which were inserted into a piece of hollow wood and, in return, “[flew] away suddenly and [burned] everything.” A second recipe for artificial “thunder” included one pound of sulfur, two pounds of willow charcoal, and six pounds of saltpeter. A significant innovation in the manufacturing of black powder started in late 14th century Europe when wet grinding was incorporated. In this method, a liquid (often distilled spirits) was added during the grinding of ingredients and then dried afterward. The goal of this method was to keep the dry ingredients from separating from one another. When the paste was rolled together into little balls before it dried, the black powder was less likely to absorb water from the air during
storage, which meant it traveled better. The formed black powder balls were then crushed in a mortar by the shooter right before use in the gun. That process helped the shooter have consistent loading amounts of black powder, which in turn meant more predictable results. In fact, that new method caused the black powder ignition to be up to 300% more powerful than when using only the loose powder.